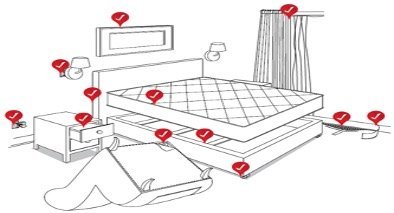 WHERE CAN YOU FIND THEM?

Bed bugs are found almost anywhere despite their name. Beds are the most common spot, but they can also be found in locations such as; picture frames, couches, chairs, office desks, ceilings, base boards, wood flooring, smoke detectors or seating areas. Bed bugs, by the way, can live a year+ without feeding which is why even vacant areas can still be infested. They are considered “vector pests” by the NPMA (National Pest Management Association) and have been known carriers of Chagas Disease. It is currently not known, (but unlikely) if they can transmit Covid-19, but regardless, they are filthy, bloodsucking organisms that are extremely difficult to eradicate.

If an infestation is new, it’s unlikely that you will locate or even find one bug because they are small and easily overlooked. Perhaps your guests or staff are getting unexplained bites on their legs, arms or back, as shown in the picture to the right, but no visual evidence is found during the initial inspection. Bed bug problems can start with just one female. Within 5-12 weeks that one bug could populate into an infestation with over 10,000 new bed bugs and continue to spread into multiple rooms. Also, know that only roughly 40% of people react to bed bug bites. That means that a staggering 60% of people show no signs of bites at all. Which is another reason why they go undetected for so long.

After a few months of initial exposure, an infestation will take over, and finding it becomes much easier. You will start seeing visual evidence of bed bugs like the picture to the right. At this point, the guessing game is over, and you have a very big bed bug problem. This is why routine canine inspections for prevention is very important to implement. Being proactive reduces the risk of legalities, loss of business or the possibility of tainted reputations, but most importantly you and your residents are being protected.

HOW THEY BECOME A PROBLEM

In regards to hotels, the number of bed bug cases grow every year. Hotel guests or employees can easily bring in bed bugs if they have a problem at home. However, some guests are bringing in baggies of live bed bugs just to scam a free hotel stay. Sadly it is a common occurrence, but we have an established program that will get our teams on property within hours of a customer complaint in the Florida area. The goal being to prove or disprove the potential of a bed bug infestation from the complaint.

In the beginning stages of an infestation, the bugs and eggs, are extremely hard to find. They fit easily into cracks, crevices, screw holes and even within the fibers of a mattress. This makes them undetected by the human eye. In fact, humans only have 17-29% accuracy according the University of Florida.

Dogs have been on the job in detecting bed bugs by their scent for years. Their noses are so sensitive that they can pick up scent on just one egg. Not only can they detect eggs, but they can also distinguish between the odors of a live bed bug vs. a dead bed bug, only detecting to the live ones.

What’s the difference between a dogs nose and a humans? Humans smell odors at parts per million, whereas dogs smell odors at parts per trillion. For example, if we walk into a pizza restaurant, we only smell pizza. Dogs are able to separate smells. This means they can separate the odor from different particles such as the tomatoes, basil, salt, pepper and onion. This is why what it may take a pest control technician a week to inspect, a dog can do it in just a few hours. Dogs show us by alerting where the odor is the strongest, determining IF a problem exists and WHERE. 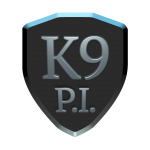